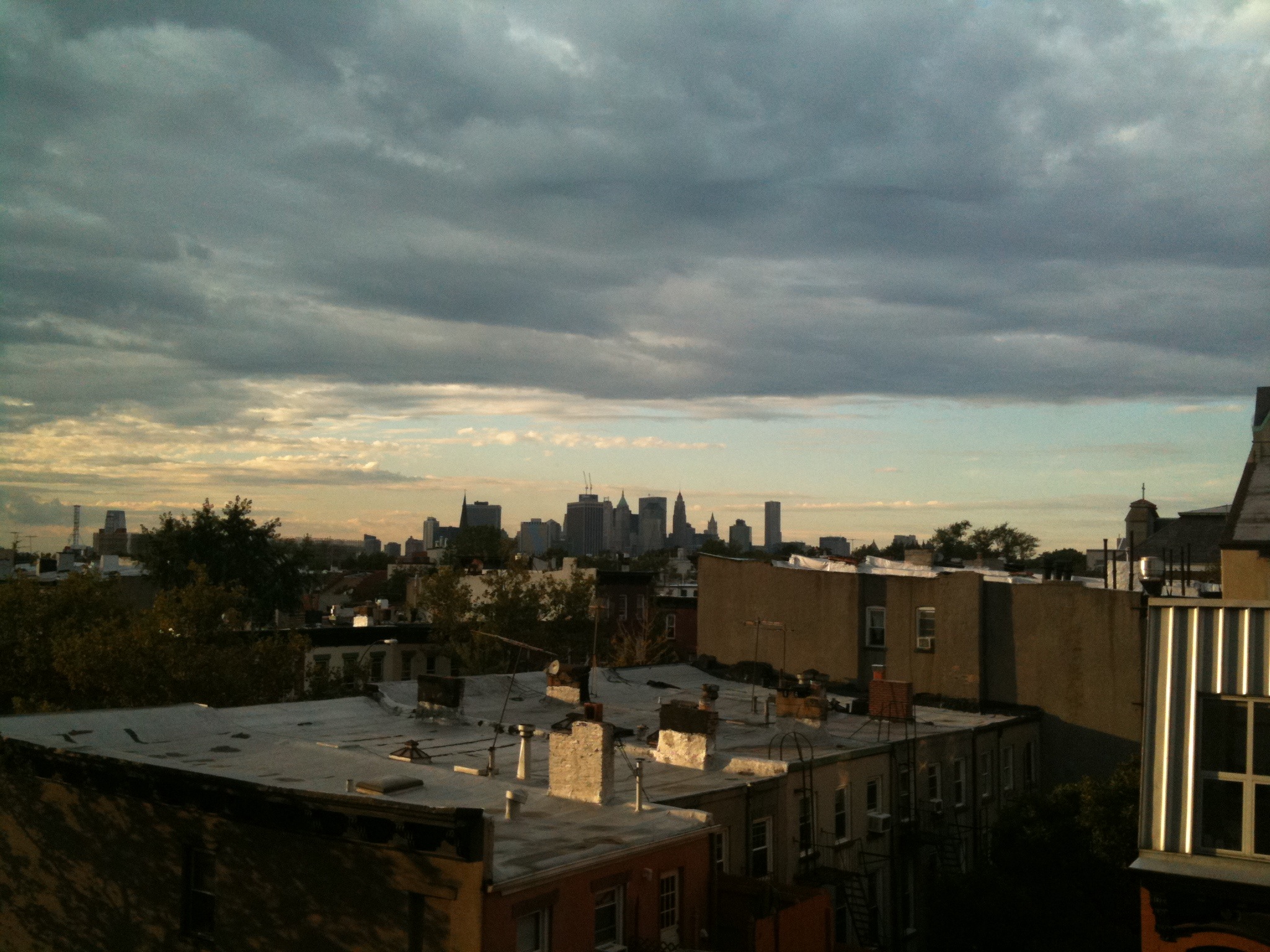 I’ve been on edge all day.

It felt familiar – perking up at every siren… shit did they hit us again??  What WOULD be the best evacuation route?  And where would we go?  North, I guess.

Shit.  As I wrote that, I started hearing a repeating, thundering BOOM sound… like cannons.  It’s still happening.  No sirens.  I checked the news sites.  CNN is on.  Nothing interrupting anything.  Fuck.  I just called 911 – just to report it and see if anybody had anything to say.  They didn’t – just took my info.  Hung up and am listening to FDNY scanner.  Shit.  Sirens now.  Oh they’re… for me??  I’m live-blogging my own decline into insanity.

OK.  Holy fuck.  Allow me to take a peaceful, restorative, deep breath.  In a matter of 10 minutes, I started writing about paranoia, heard booms (probably 20+ and no, they didn’t sound like fireworks), called 911 (for maybe the 2nd time in my life), talked to a FDNY Lieutenant among a fleet of trucks and flashing lights, and left them to commiserate with my neighbors and reassure my wife.

It was fireworks.  It really didn’t sound like it, as any earwitness will agree.

But here’s the real question: WHY THE FUCK IS ANYONE ‘CELEBRATING’ 9/11 WITH FIREWORK EXPLOSIONS AT 10:30PM?!  That shit should have been canceled immediately after the ‘credible’ threat was announced.  I mean… it’s not like the terrorists win if we can’t have fireworks that scare the shit out of everyone.  Is anyone really that committed to protect the sacred freedom of putting loud sparkles in the sky???  Let’s be real – even sniffer dogs are on edge.

Alright, but what I really wanted to do was recount the day – what we did to fill the time… everything in-between my worried, distracted brain.
Want to see how America fought back the tyranny of terror on the eve of such an important day?  We went to Lowe’s.  And so much more? 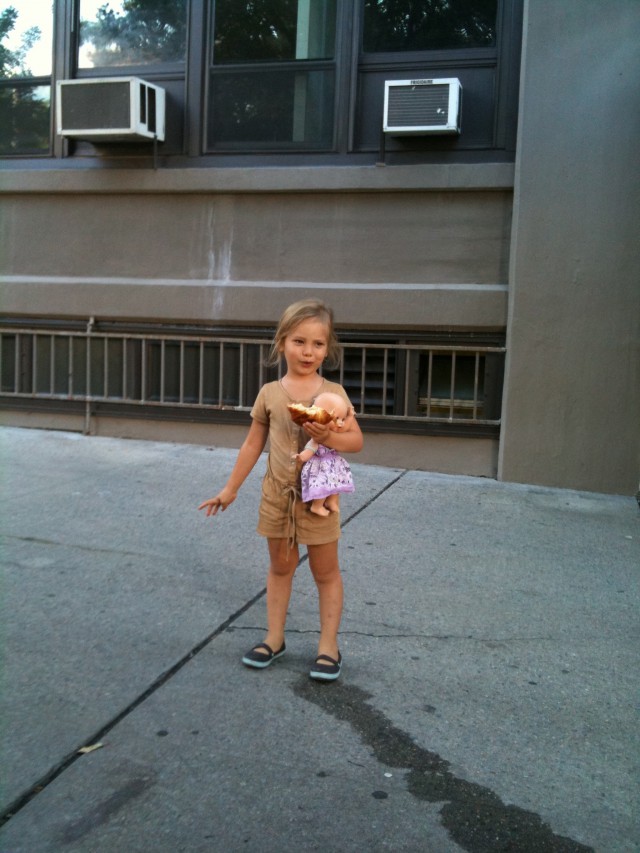 Jo went to the coop early.  Yes, we belong to the Park Slope Food Coop.  I know people who think that shit is gay.  To them I say “you’re paying too much for that banana”.  Anyhow.  As soon as groceries were unpacked and breakfast was had, we decided to go out for a nice cup of coffee.  Here, Mae and I wait down in front of the building for everybody. 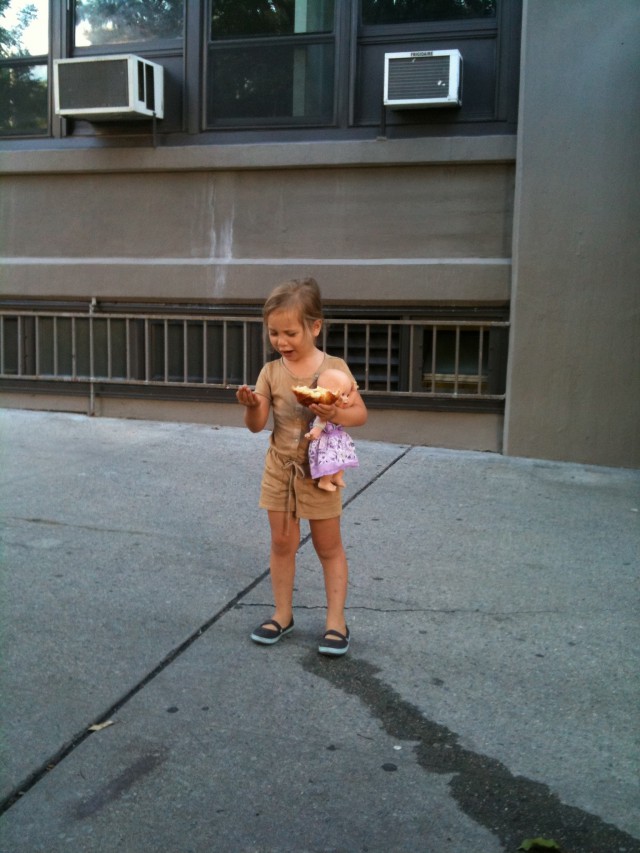 Mae is eating a croissant, but I assure you, we’re 100% American.  She’s 100% hilarious – I don’t know what the fuck she was talking about here, but she knows when she needs to use her whole body to sell a comedy bit. 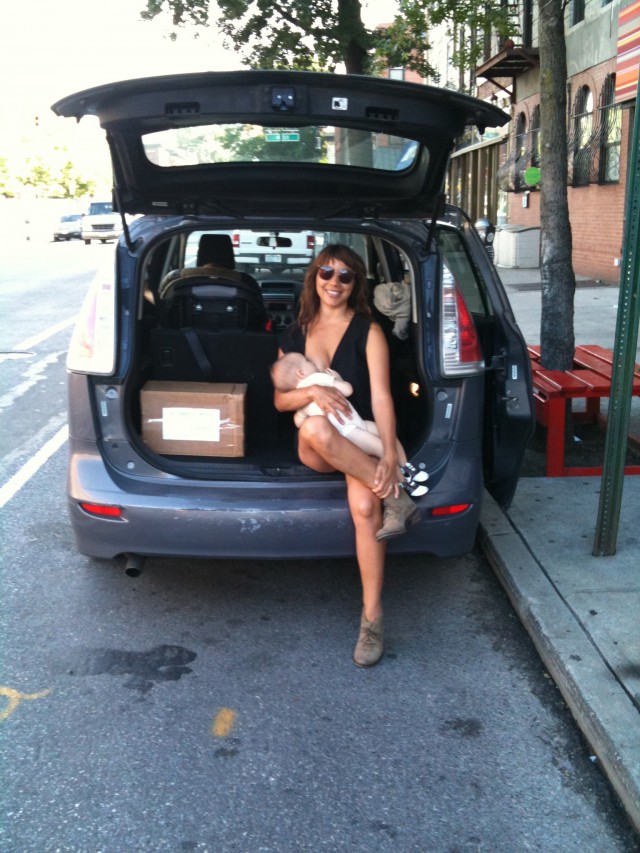 Just parked in front of Café Martin – Charlotte insisted on getting her favorite organic frothy milk beverage to go.  And that’s our whip, y’all.  Rappers wives have verses bragging about how many carseats they roll with in the tracks they write (which their husbands will never record). 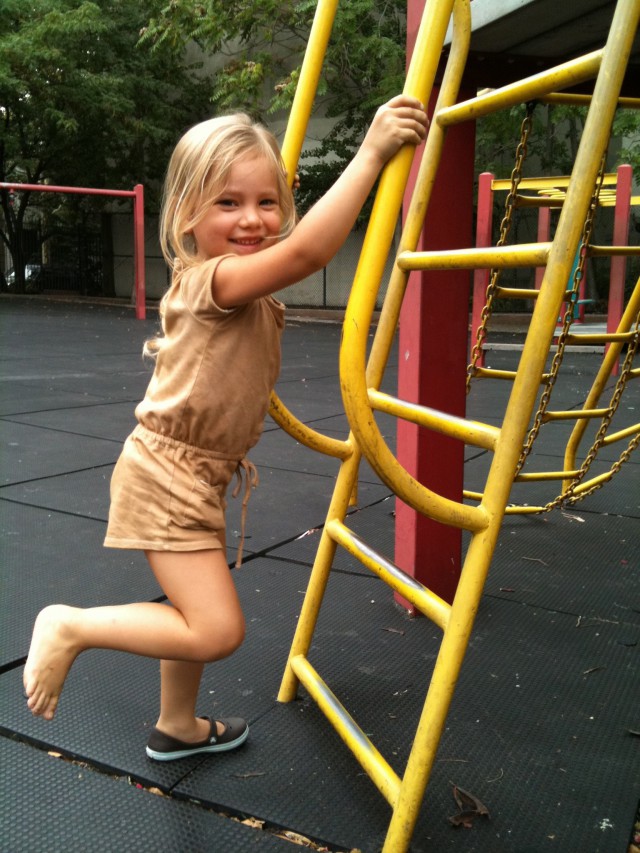 Then we took the girls to the playground while Charlotte slept.  Brooklyn playgrounds – little girls might get their sneakers took. 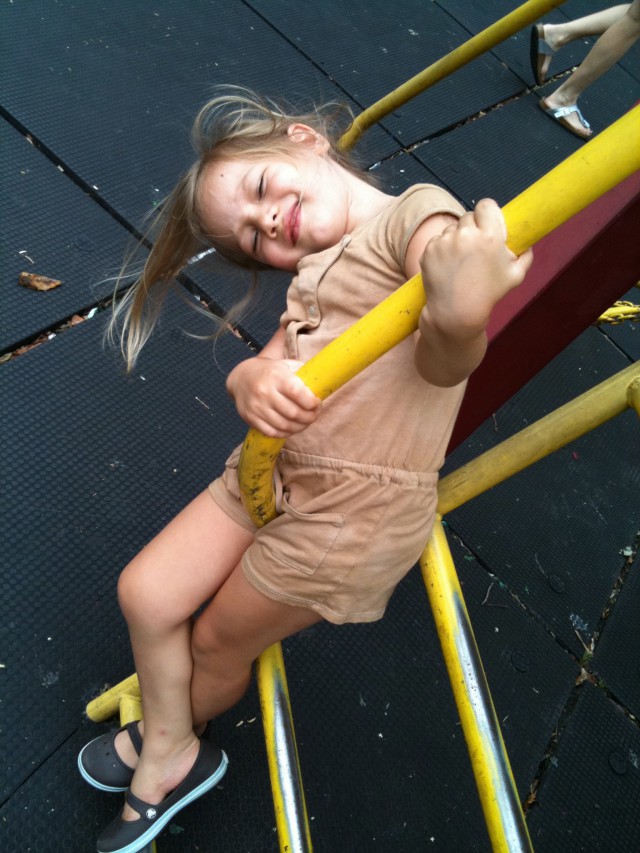 You see, most of us don’t have backyards and take our kids to public city playgrounds in the same way that people take their fucking dogs to the dog run. 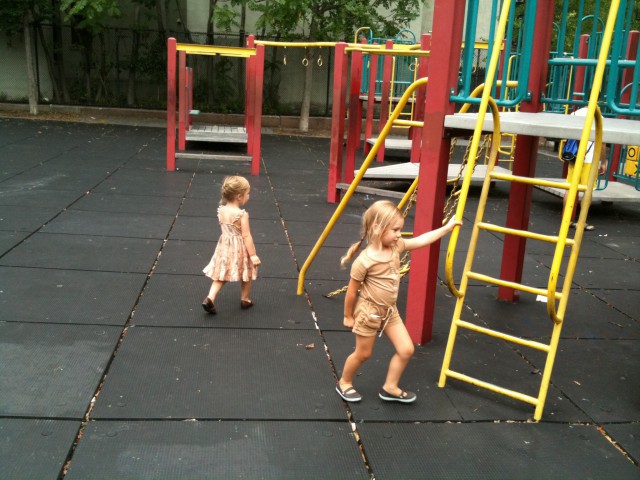 We’d never been to this particular Park Slope playground.  I think that was the actual name: ‘Park Slope Playground’ – it’s on Berkeley.  Kind of suspiciously inconspicuous naming.  What are they hiding?? 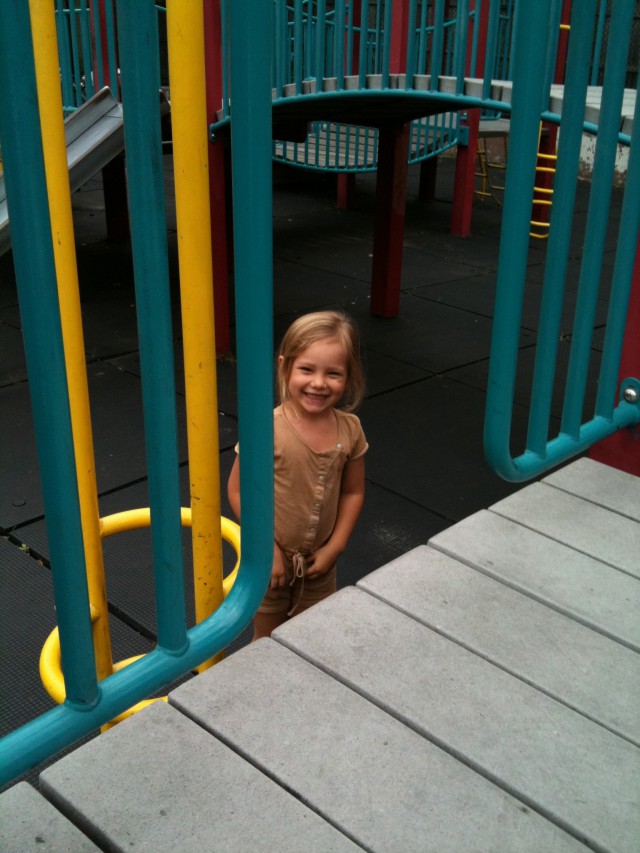 I really liked the cool/bad color scheme here.  Even more, I liked seeing Mae and Ida run around.  We don’t take our kids to the playground as much as most Brooklyn folks do, I think. 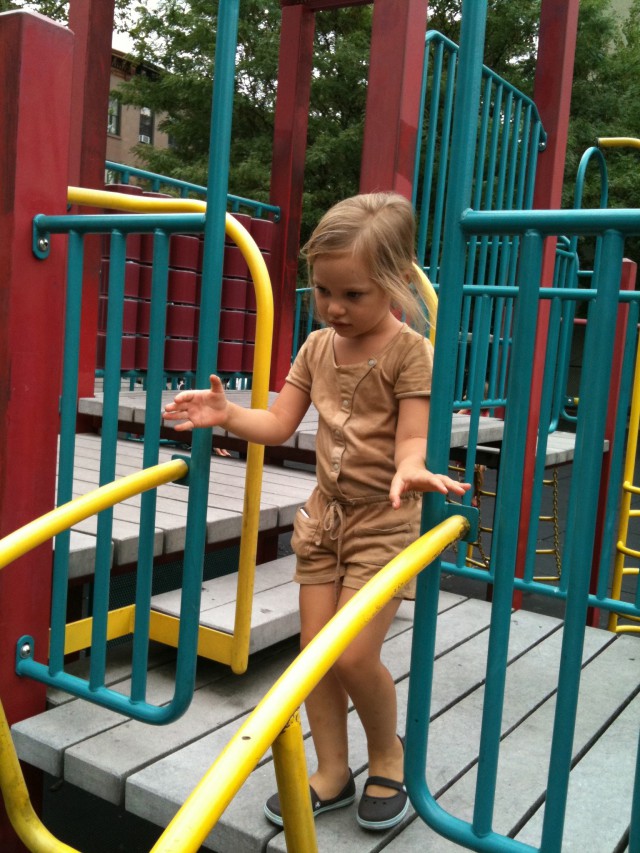 This could be considered an action shot for Mae: her calculating, careful, small, steps.  Sometimes the sound of those wheels turning in her head distract her from her immediate surroundings. 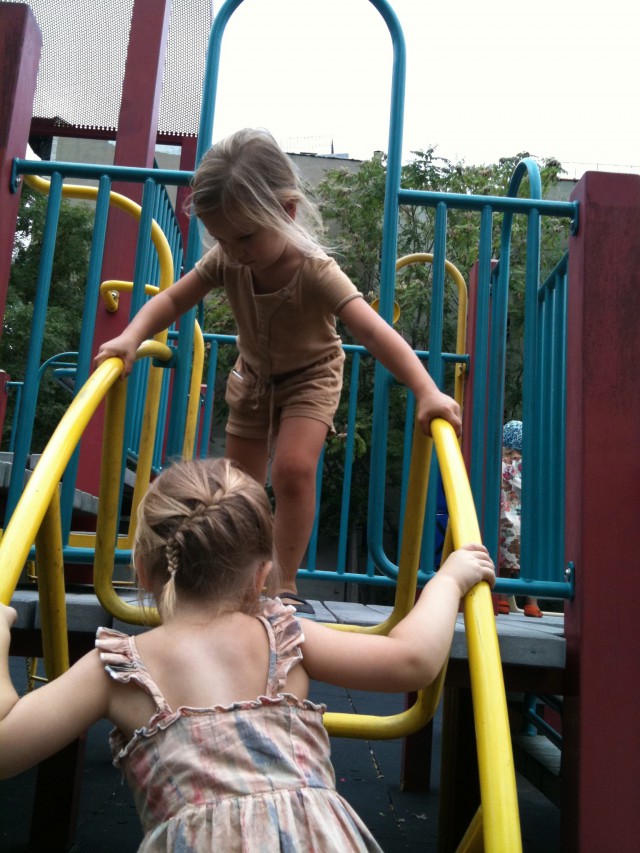 I kept trying to get good shots with both of them.  Oh well.  But look – Ida’s hair in a braid, wearing a dress… she is not a baby anymore.  Which is great, cuz we already have a baby in the house. 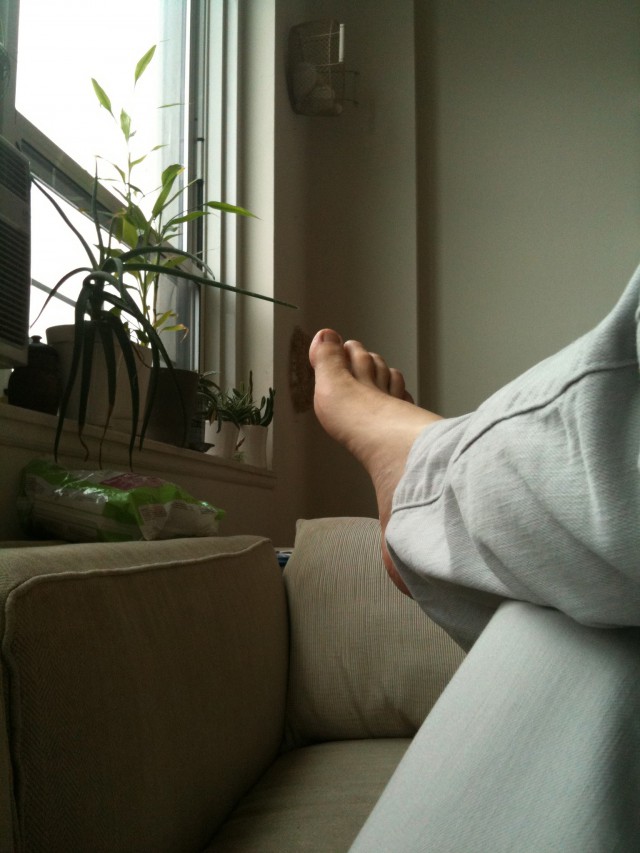 We went home before noon for Ida’s nap.  This moment above lasted exactly 26 seconds.  I’m so glad I captured it. 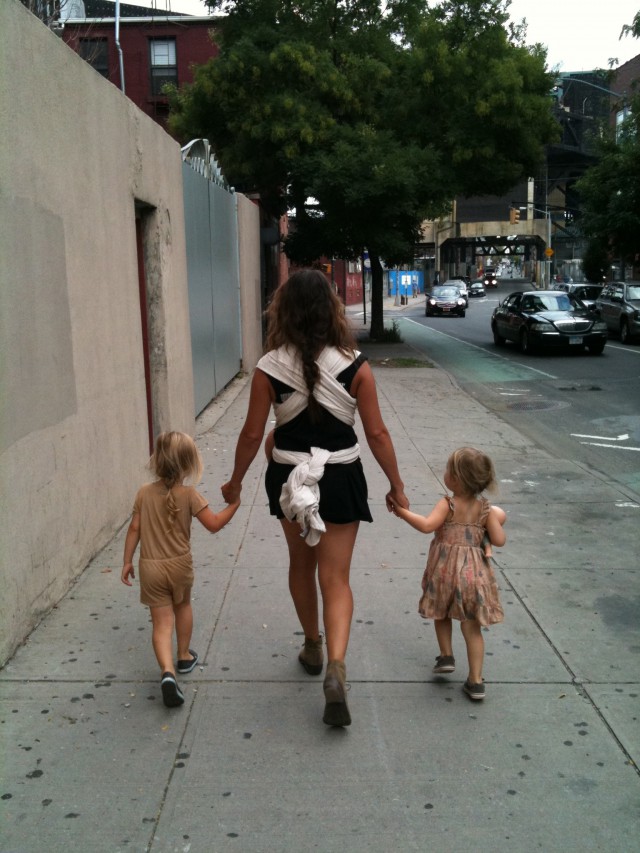 When Ida got up, we went to Lowe’s which is within walking distance.  We’re thinking about putting a fresh coat on the walls.  I was thinking about supplies for my nuclear evacuation kit.  I’m not fucking kidding. 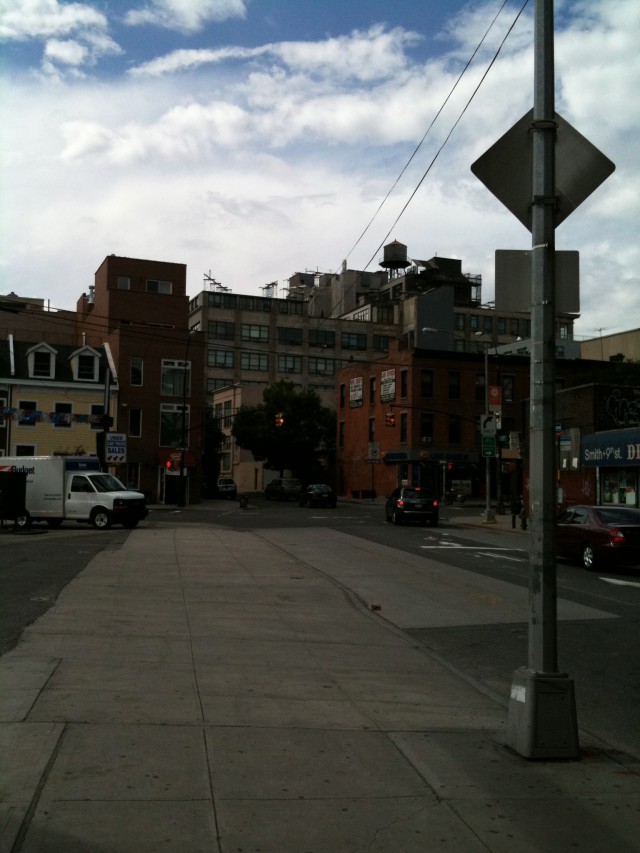 Kind of underexposed look backwards to the giant fortress-like building we live in.  We need to stop taking all our pictures with our phones. 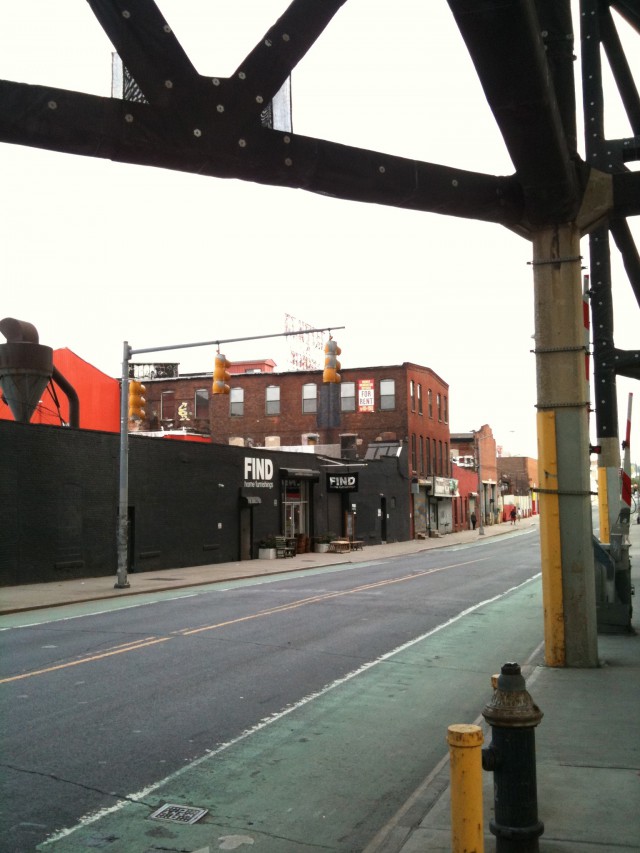 Crossing the Gowanus.  Ida was holding my hand for most of the way there. 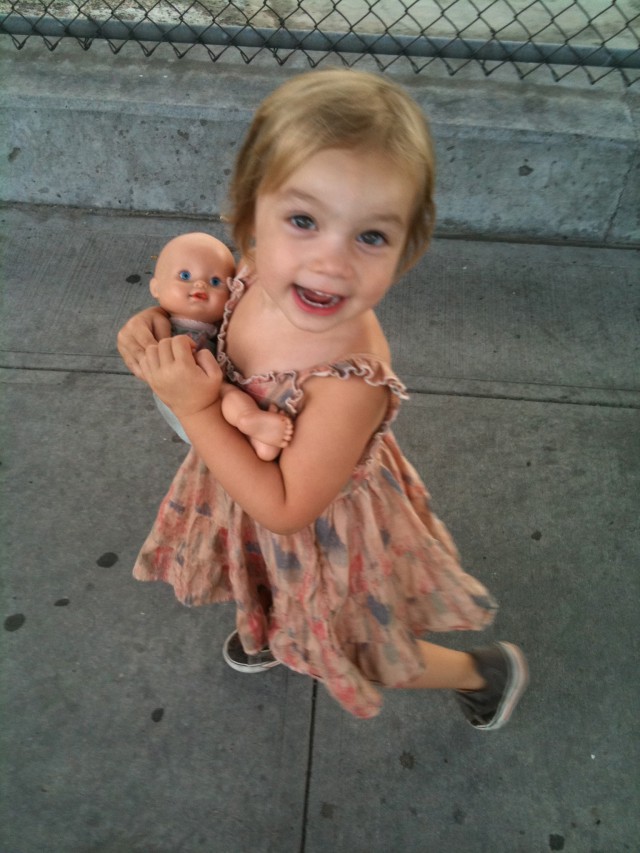 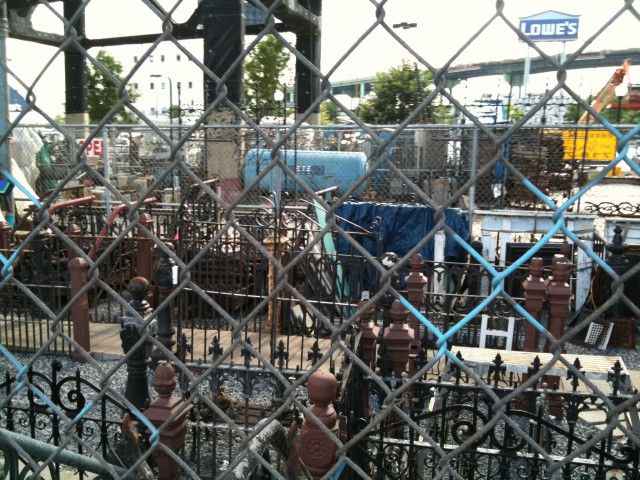 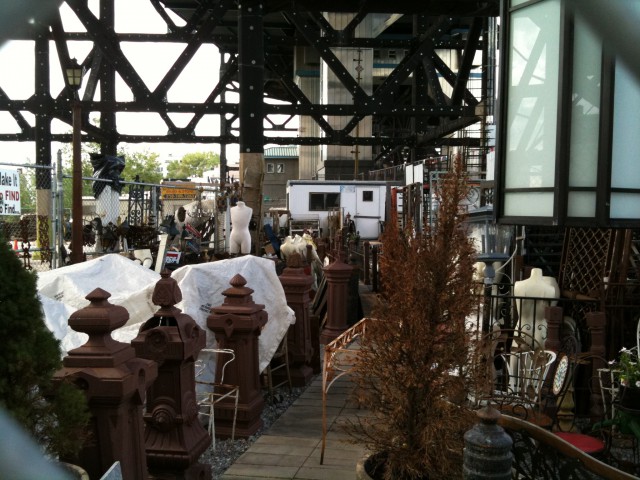 Did I mention we live in a crazy industrial junkhole between two long-gentrified neighborhoods?  Underneath the elevated F train, you can buy some serious cast iron shit and less serious mannequins.  We buy our Christmas trees here every year. 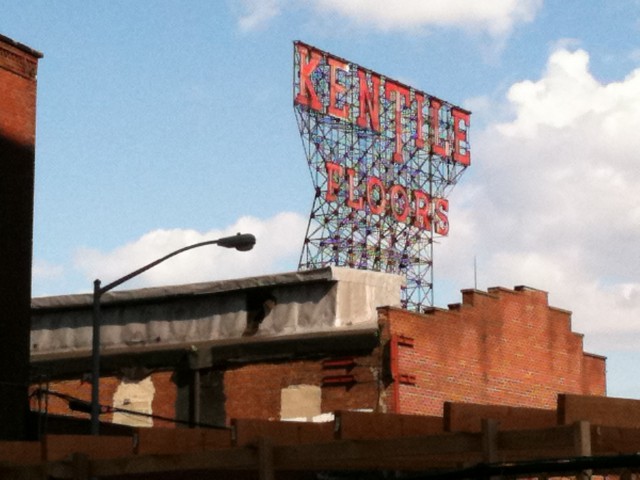 If the smell doesn’t give it away – you’ll know you’re near the Gowanus canal if you can see the world famous (?) Kentile sign. 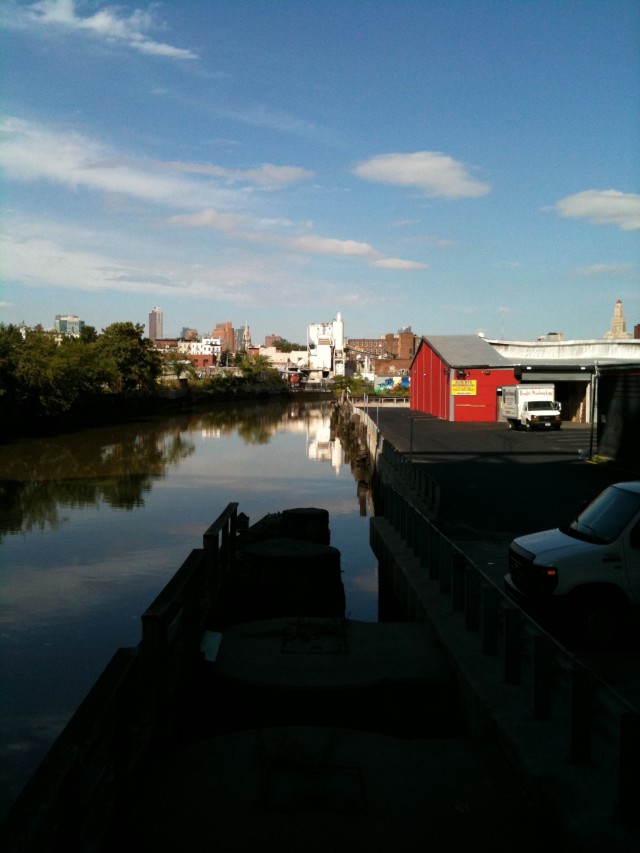 The canal itself – looking northeastishly.  Someday soon, this will be the Venice of Brooklyn.  I’m not fucking kidding about this either. 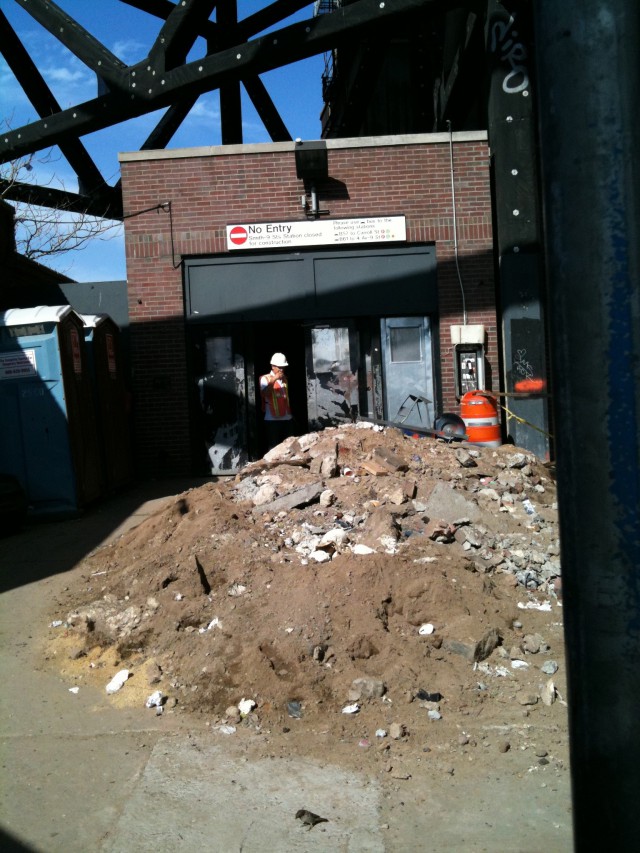 I snuck a shot into the construction at the entrance to the Smith/9th Street train station.  Another 12 months until completion??  I hope they’re building the world’s nicest elevator.  The station is one of the city’s shittiest and definitely tallest.  This guy saw me – for a moment I feared he was as paranoid about today as I and might’ve mistaken me for an enemy combatant, ready to sabotage the station.  Hell, for all we know, the construction is all Al Qaeda mandated.  Construction looks like destruction until right at the end. 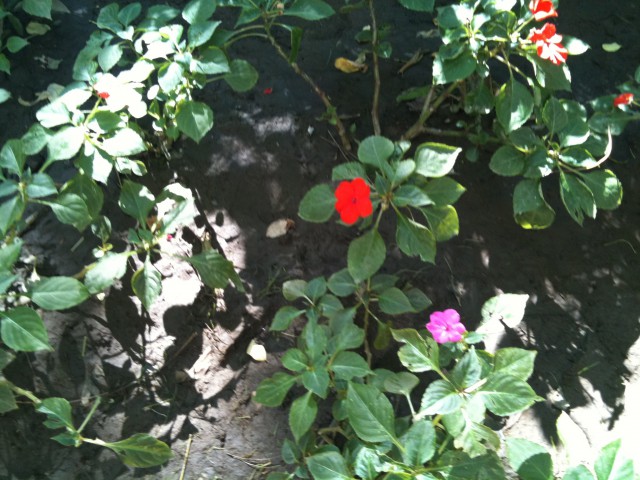 Mae took this of some of the landscaping in the courtyard. 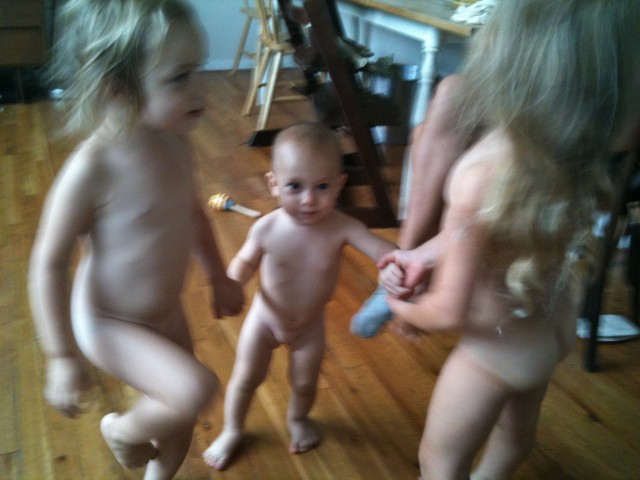 This is how the girls blew off their last steam before bath time.  Charlotte is walking now – more often than crawling at least… they look crazy all walking/dancing together. 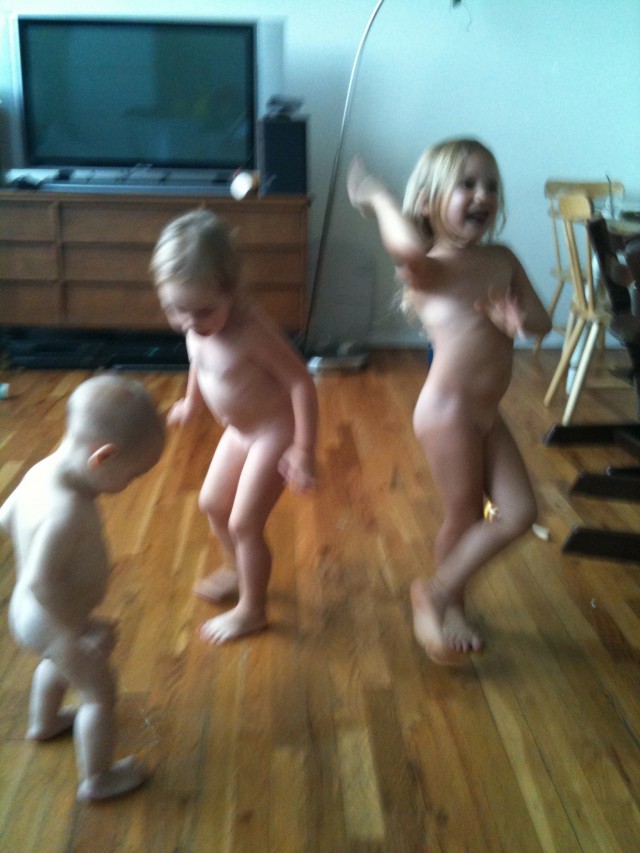 Difficult to discern, but I actually captured Charlotte pissing on the floor in this shot.  Ida watched it happen live.  Mae is summoning powerful magic with that stance (I hope). 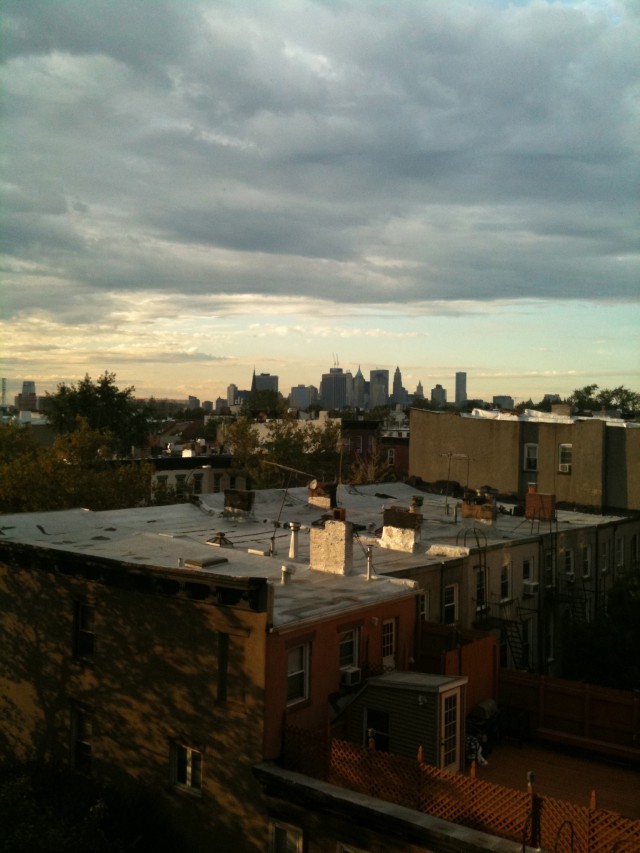 I wish I could say I took this JUST to capture the serene sunset after a lovely day.  I wish I wasn’t also thinking, “Wait, I should take a picture of the city before the shit hits the fan.  This could be a historical documentation (on shitty iPhone camera) of what downtown NYC looked like the day before 9/11 2.0…” Fuck.

Dear God.  I’m sure when I re-read this whole thing next week, I am chuckling at my own silly paranoia, as life goes simply on.

But one last thought dump… I was here 10 years ago.  I don’t think about it that much.  But any American can tell you how savage and sudden and needless it felt.  We didn’t know anybody was that pissed at us, frankly.  I traveled to Japan that year – I was amazed at all the supportive, empathetic vibes from abroad.  All that feeling was squandered of course by the fucktard Bush Junior as he decided to engage the world in a holy war disguised as some half-baked pre-emptive self-defense move.  It’s my belief that that guy and his cocksucking friends did less to protect American citizens than Osama bin Laden.

FORGOT…
After putting the girls to bed, it was nearly dark.  The memorial lights are lovely from all our windows.  We moved here in 2006 – the towers would have been lovelier, I’m sure.  When the beams shot up last night, the low clouds created a beautiful highlight.  Again… I need to get a new camera. 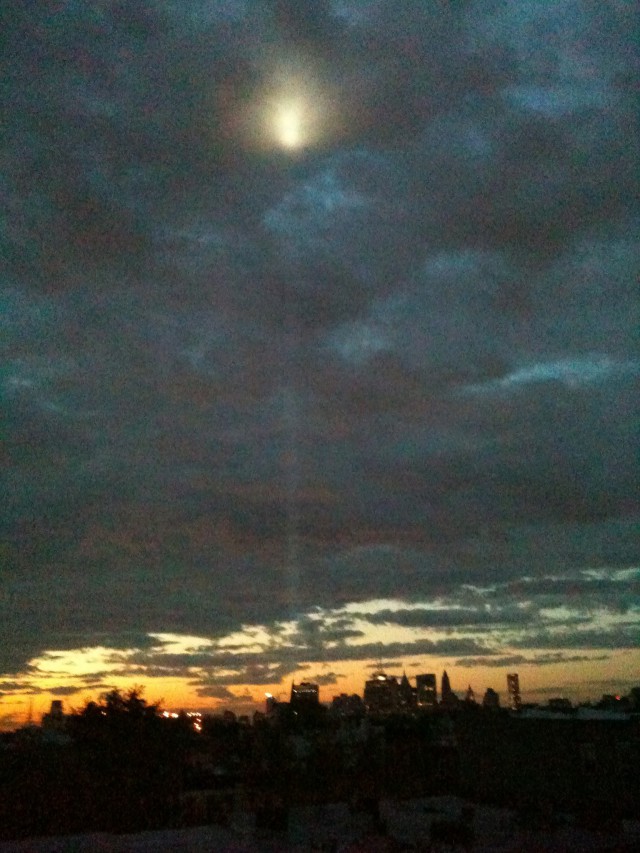 For the record, I’m sorry I accused you (reader of above) of whining. You’re not whining… why would I say that? You don’t whine to me. The children – who I live with – they do that. They love me dearly and yet they talk to me in tones that are scientifically proven to have created all suffering in the world. I’m not whining myself, I’m complaining. Not sure it’s better. Please accept my apologies for all of the above.