This is now super old news, but back in March we got into a car accident.  A guy decided he wanted to take a sudden left turn and discovered that this was where we were driving at that time.   It was pretty sudden and scary.  Three tiny kids in the back seats and my unborn child in Jo’s belly up front – we went skidding back across all three lanes, so lucky that nobody was speeding along on the right.

Everyone is fine, but it was weird.

I drive (fast) for around 3 hours every day, across miles of different winding roads – passing old folk, teenagers and assholes from around the world – but driving to my Brooklyn accountant’s on a leisurely Saturday turned out dangerous-er.

So the dudes in the offending vehicle (very nice people) and a friendly witness from the car behind us (even nicer person, since he didn’t hit me in the car with his car) all came over to check in on us, exchange info and wait for the cops to do an official report in case our insurance companies decided to be dicks or (even worse) in case my little daughters started complaining of neck pains later that night or something.

My brilliant wife turned what could have been traumatic, nightmare-inducing stress into a fun picnic with the girls while we waited around.  The kids had a great time at the accident! 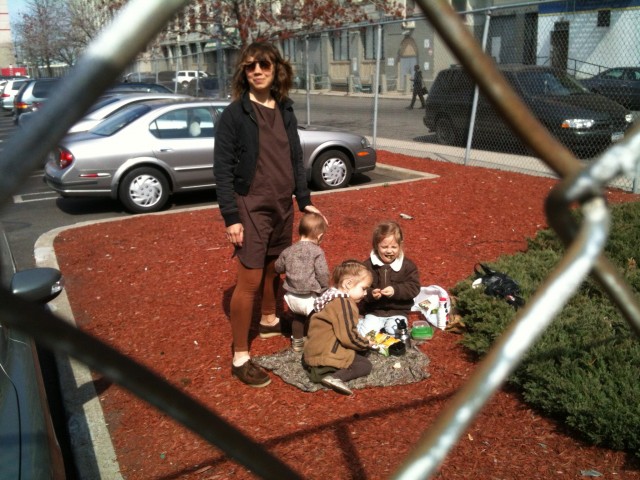 Snacks in the sun!  What more could you want other than not having had an accident? 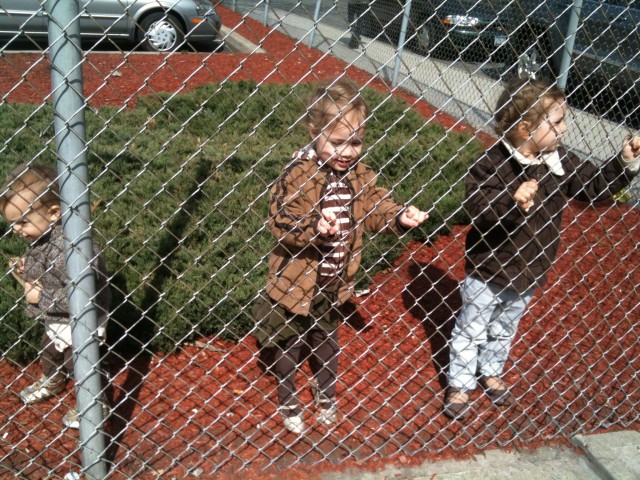 I think it was their first time gripping a cold chainlink fence!  So glad I captured it on film!

The kids were fine, but the whole right side of the car was fucked to shit.  Neither door opened properly which makes getting three small children strapped in and out of three carseats across three rows of an already cramped miniminivan maddeningly, challengingly sucky.  Since it took awhile to get insurance sorted and get the whip into the shop, it looked like this for a long time: 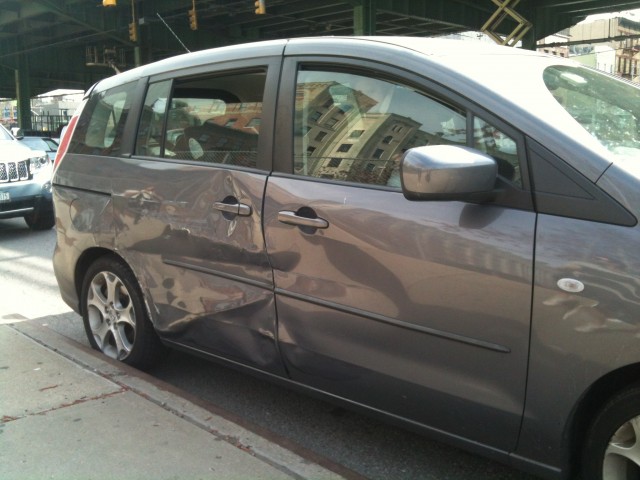 This is my ride.  FEAR THIS.

Aside from the challenges of nonfunctioning doors, I kind of liked driving around a busted up vehicle.  People gave me a wide berth, for sure.  When I’m driving and I see a dented up minivan, I definitely give it some room on the road – clearly the driver is a desperate soul with little to lose, right? 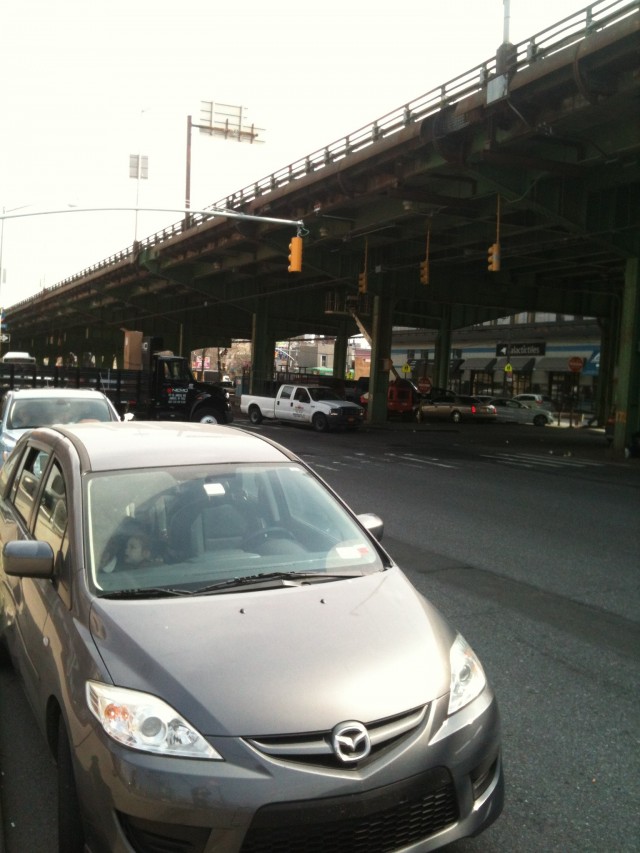 Another angle of the action.  The white pickup was the one that hit us.  These photos of the car were taken in the pursuit of gathering potential evidence, by the way.  This is what most of Brooklyn looks like, by the way. 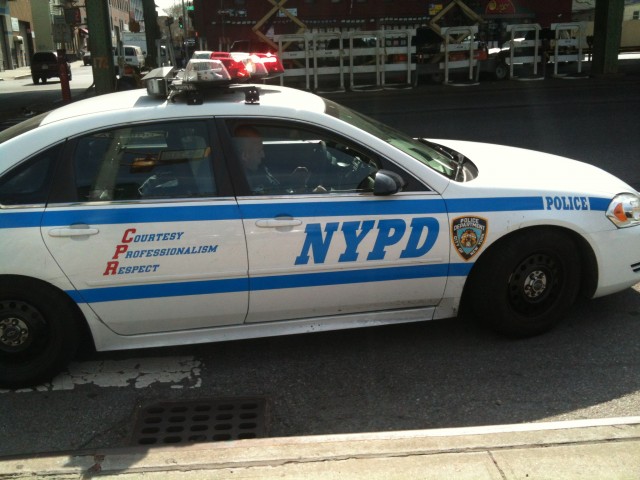 Eventually, the police came.  New York police don’t give a shit about stuff like this or people like me.  As I, still nervous and adrenalinized, described to them what had happened, I watched their lids droop and their mouths yawn.  They almost passed out in their cruiser from the boredom.

Once everything was sorted out with everyone, I was given a rental car.  The first one I got smelled a little like cigarettes, so I swung by and got a new one. 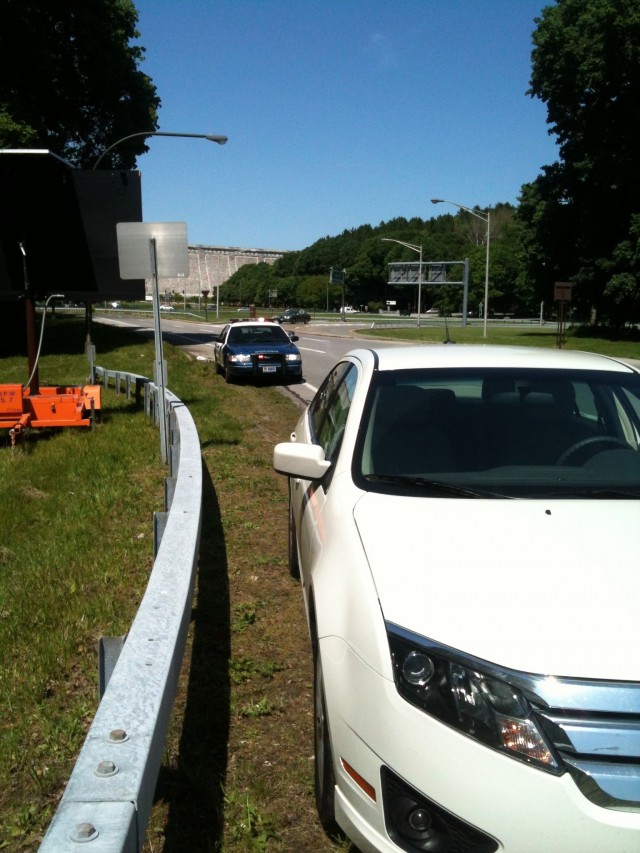 I was able to use the forward momentum to pull over.  The car stopped being a functioning car right after turning off of the rotary I pass through every day.  Thankfully it didn’t happen a moment sooner.  Hard to pull over in the middle of a rotary, huh?

The vaguely apologetic rental company sent someone to pick me up, which was nice.  They brought me to White Plains to get a new car.  I was in a hurry and they were booked up, so I got this grey pickup truck.  Driving pickup trucks is a great American virtue, but super inconvenient in the narrow sidestreets of Brooklyn.

Including the shiny grey truck, the total count was now three rental cars in around 8 days I think.  And wouldn’t you know it, shit hadn’t yet hit any fans!  Moments after the above photo was taken in downtown Brooklyn, a squad of angry squid-ish aliens descended on the city and for some reason focused all of their hatred against mankind on my rental pickup.  They like, shot purple rays out of their beaks which decimated the truck on the molecular level or whatever?  Did you know I’m kidding?  But I hope somebody skims this article and then calls me in a panic.  Everything turned out fine, of course. 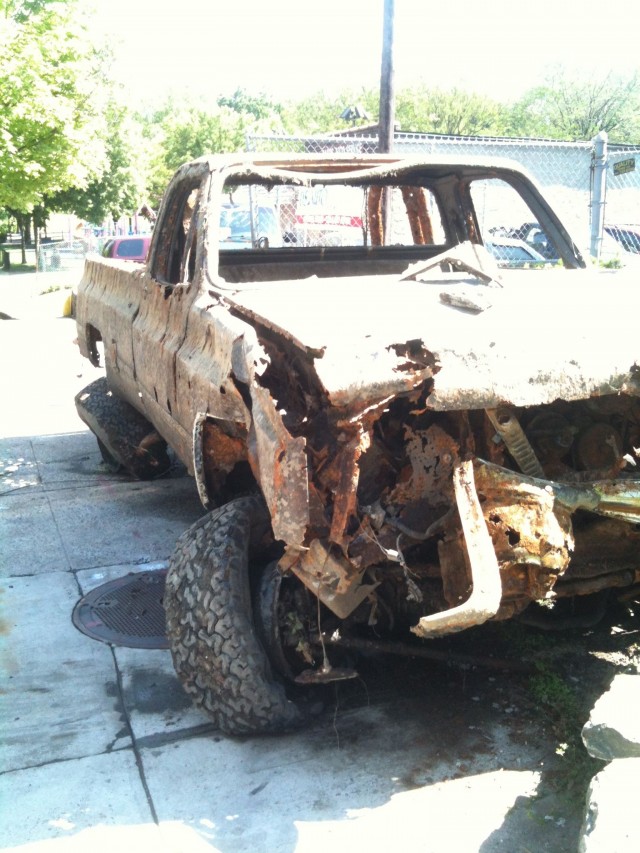 I barely escaped with my life!